The three 18 storey buildings were demolished on the instructions of the City of Edinburgh Council, who awarded the contract to Safedem. The buildings, once home to 285 flats were demolished by the controlled use of explosives to make way for the regeneration of the area. Our Explosives Engineers designed a collapse mechanism to direct the structures away from live gas services.

The use of delays minimised ground vibration and air over pressure all to the satisfaction of the stand-by service teams who confirmed that their equipment was unaffected following their post blowdown inspections. The gale force winds throughout the weeks preceding blowdown, posed numerous problems with installed protection being disrupted and making it nearly impossible to complete operations on schedule for the blast date.

Safedem’s Community Liaison Team planned and managed the evacuation of 165 properties and catered for residents throughout the operation. Managing Director stated:- “Its only natural for everybody to focus on the five second result , but the hard work in the build up from our entire team is something of which I am very proud. From our lads on site to our community liaison team to our office staff who all contribute on the day, the Safedem team puts in an incredible amount of hard work to ensure that we deliver the most professional explosives demolition service possible.”

Maxwelltown Dundee – Four In a Row 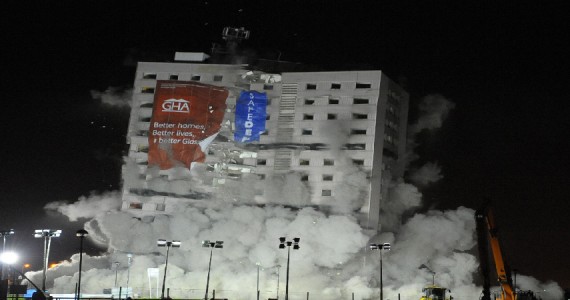